The Ad Hoc Committee to Save Keiro has scheduled a march and rally to serve the State Attorney General with the additional hand-signed petitions (to-date, over 12,000 hand and electronic signatures petitioning the A.G. have been collected) asking for a public hearing sponsored by the Attorney General’s office as well as the results of the “Speak-Out” public hearing participant forms containing the 4 questions, and a video of the speakers, held by the Ad Hoc Committee Saturday, January 23, 2016 at Centenary United Methodist Church. 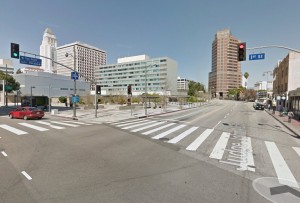 The march and rally starting point will be at the public square on the northwest corner of First St and Judge John Aiso St (formerly N San Pedro St) at 10:00am.  The procession will then march through Little Tokyo leaf-letting and eventually arriving at the rock garden in the plaza of the Japanese Culture and Community Center (JACCC), 244 S San Pedro St, by 11:00am.

After reassembling at the Rock Garden/JACCC for the second rally, the last leg of the march and rally will continue for three blocks to the Reagan State Building, the entrance located at 200 S Spring Street.

The third rally will then be held at 12:00 noon. A delegation of the Ad Hoc Committee or a representative of the Attorney General has been asked to accept the petitions, results and video.

The presentation and delivery to the Attorney General’s representative of the petitions, public forum results and video of the speakers/testifiers will be done with an official signing of a receipt acknowledging the delivery of the material. A photo op and press conference will follow.